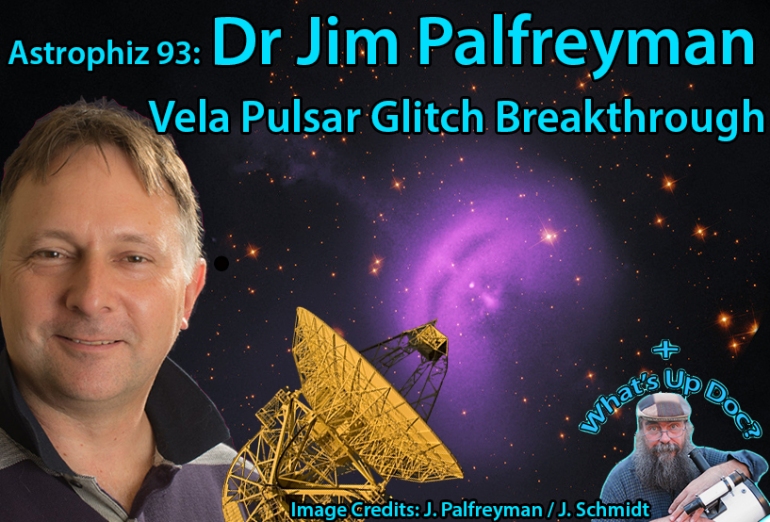 Listen: https://soundcloud.com/astrophiz/astrophiz-93-dr-jim-palfreyman-the-vela-glitch
This episode features astrophysicist Dr Jim Palfreyman, who is a data analyst and casual researcher at the University of Tasmania. Today he tells us about about his celebrated Nature paper about the way he analyses Vela’s glitches and how that came to tell us about the inner structures of neutron stars/pulsars..

In the sky for observers and astrophotographers:

Our regular feature ‘What’s Up Doc’ is with Dr Ian ‘Astroblog’ Musgrave. He previews the excellent planet viewing opportunities over the next two weeks under moonless skies, how to find Vesta at its brightest, the variable star Mira approaches maximum and he gives us an update on our first interstellar comet 2I/Borisov, reaching maximum brightness in early December

We have news from the grave. Two years ago we all watched sadly and triumphantly as Cassini speared into a fiery death into Saturn, and you might want to listen again to Episode 43 where we were guests at the NASA tracking station at Tidbinbilla.
The news is that Cassini legacy just keeps on sciencing on. There’s a new paper in the Monthly Notices of the Royal Astronomical Society by Khawaja et al about a data analysis that revealed that Saturn’s moon Enceladus is erupting a plume of gas and ice grains from its south pole. Now we already knew that an that these plumes originate in the moon’s subsurface global ocean, and plume material travels through cracks in the icy crust and is ejected into space.
What’s new is that the Cassini spacecraft’s Ion and Neutral Mass Spectrometer (INMS) detected volatile, gas phase, organic species in the plume and the Cosmic Dust Analyser (CDA) discovered high-mass, complex organic material in a small fraction of ice grains. Now these amines, carbonyls, and aromatic compounds could be ideal precursors for organic compounds in the warm depths of Enceladus’ ocean.
So Life on Enceladus?
We don’t know yet, but Cassini’s legacy doesn’t just live on, it’s shouting science very loudly.
Stay tuned to Cassini’s echoes, there’s more to come!

Our next episode is a fabulous interview with Amanda Wherrett who is a magnificent storyteller who paints a vivid picture of the Dark Sky Siding Spring Observatory, its amazing array of research telescopes and instruments and the research happening there high on top of the Warrumbungle Ranges in remote New South Wales in Australia.

And the episode after that we have Steve Olney, the amateur radio astronomer who captured the Vela Glitch that we talked about in this episode, as it happened. And he did it from his home-made radio telescope in his back yard. This is Citizen Science writ large and another great episode to look forward to.

You can also look forward to our first ‘Are We Alone’ feature episode with Professor Geraint Lewis and hopefully we will also have Suzy Jackson on a show for you, to talk about her work as an engineer on the MRO, ASKAP and the New Norcia tracking station. Stay tuned!