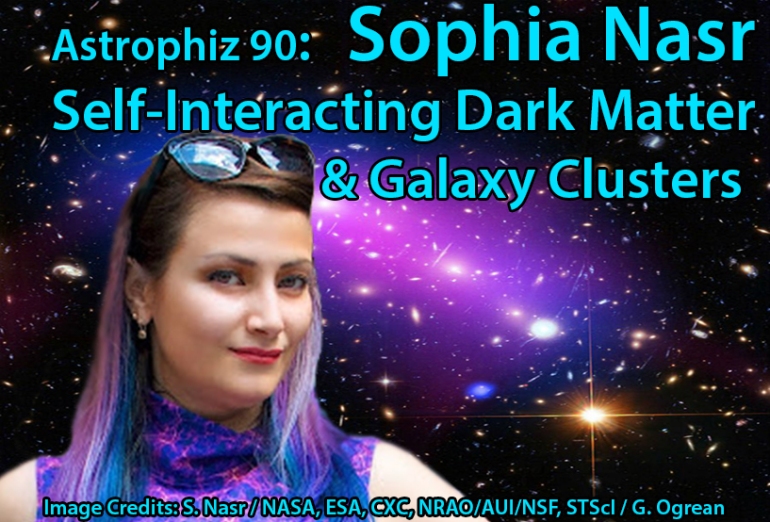 Astrophiz 90: Sophia Nasr – Self Interacting Dark Matter and Galaxy Clusters
This episode’s featured guest is Sophia Nasr, who is a fabulous  graduate physics student at University of California, Irvine who is working on her PhD in cosmology and astroparticle theory with a focus on researching Self-Interacting Dark Matter. She brilliantly explains all forms of dark matter research and her passion for cosmology, equity, diversity and outreach.

Observation notes for September include Saturn, Jupiter, the Moon and Uranus.

the crewed Soyuz MS-15 spacecraft to the International Space Station with members of the next Expedition crew. The capsule will remain at the station for about six months, providing an escape pod for the residents.

For citizen scientists there is a nice opportunity to participate in the Globe at Night dark sky project, which is concerned with light pollution.

To contribute to this worthwhile project, Northern observers can go to tinyurl.comFORWARDSLASHdarkskynorth

And Southern observers can go to tinyurl.comFORWARDSLASHdarkskysouth

And they are both all lowercase, all one word.

First up it looks like we have an amazing new interstellar visitor, Congratulations to Gennady Borisov, for his discovery of comet C/2019 Q4 (Borisov). The first interstellar comet ever found and a truly skybreaking discovery!
The Minor Planet Center has published the official announcement.

Reports have also just come in today that water has been detected on a distant exoplanet. The reporting on this discovery is all over the Internet and all over the place in terms of accuracy. No, it’s not an earth-like planet. It doesn’t have water ‘on’ it because it’s most likely a Neptune-like planet with no actual surface, and you wouldn’t survive long enough if you were there to develop any habits. it’s becoming clearer and clearer that terms like ‘habitable’ and ‘goldilocks zone’ aren’t really effective tools for accurately communicating science to the public audiences. If you want to get the lowdown on habitability and exoplanets, you couldn’t do better than to follow Prof Jonti Horner and Dr Elizabeth Tasker on Twitter, or hear from them directly by checking out their episodes at AstrophizDOTcom

It was also sad to hear that ISROs moon landing has run into problems but our fingers are crossed for them and other news from the moon is that the Chinese Rover has detected some strange gel-like substance in a crater.

Chinese astronomers have detected over 100 repeated fast radio bursts (FRB) – These particular FRBs are mysterious signals believed to be from a source about 3 billion light years from Earth.