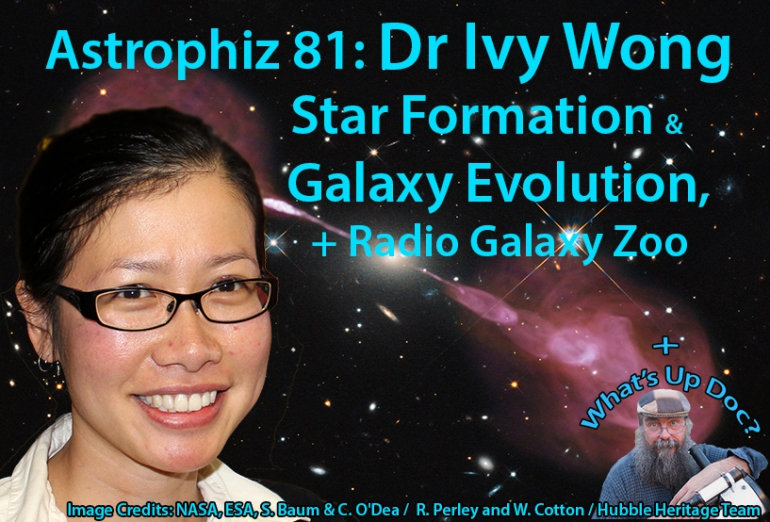 Today we are speaking with Dr Ivy Wong, who researches supermassive black holes, star formation and the evolution of galaxies. Her research is sensational and you will love the questions she asks about galaxy evolution and how she goes about answering those brilliant questions. As one of the initial co-leaders of the Radio Galaxy Zoo project she also gives us the heads-up on this fantastic opportunity for Citizen Scientists all around the globe. Follow Ivy on Twitter: @owning_ivy
Listen: https://soundcloud.com/astrophiz/astrophiz-81-dr-ivy-wong
Then for observers and astrophotographers Dr Ian ‘Astroblog’ Musgrave , in ‘What’s Up Doc’, tells us what to look for in the morning, evening & night skies. And then Ian takes us on an astronomical tangent to talk about how other planets in our solar system have meteor showers and how exoplanet discoveries using Kepler and TESS has led to the discovery of exocomets and the likelihood of exoplanet meteor showers.
Follow Ian on Twitter: @ianfmusgrave

Astrophiz News:
.1. We have often reported on the so-far mysterious FRB phenomena, and have interviewed researchers like Dr Emily Petroff, Dr JP McQuart, PhD student Laura Driessen, and Dr Manisha Caleb. If you want to hear first hand from these researchers, go back and check out episodes 32, 35, 52, 54 and to get the skinny on magnetars, Dr Matthew Bails is great in episode 56.

Why mention magnetars in the same breath as FRBs?

About 80 FRBs have been observed, including 2 repeating ones, and there are currently 48 theories about the origins or cause of these FRBs listed on the FRB wiki page, but a new one has just got a lot of traction.

You’ll recall one of the repeaters gave astronomers a rare chance to hunt down this source’s host galaxy. FRB 121102 was isolated to a star-forming, low-metallicity dwarf galaxy located roughly 3 billion light-years away, and a dimmer, persistent radio source was discovered in the same region that produced the bursts.

This localization lent support to one theory for the origin of FRB 121102 (and possibly other FRBs): that the bursts are powered by a magnetized neutron star born decades ago in a superluminous supernova.
Superluminous supernovae are at least ten times more powerful than standard supernovae. The extreme brightness is thought to be due to the birth of a neutron star with extremely strong magnetic fields — a magnetar — that spins on millisecond timescales, emitting radiation and winds as its magnetic fields decay and further powering the explosion.

So while a FRB wasn’t found coincident with the super luminous supernova, the teams’ observations were only 40 minutes long, and they will no doubt conduct longer observation times to possibly discover a co-located FRB.

.2. From a Cosmos magazine.com a report from a NASA Conference last week, NASA used an international conference to war-game a scenario in which a “newly discovered” asteroid moved from having a 1% chance of striking the Earth to actually obliterating a big chunk of New York City.
The exercise was conducted as a way of exploring possible responses to a situation that, should it ever arise, will be of global, and perhaps existential, import.
The scenario was played out over the course of five days at the International Academy of Astronautics’ 2019 Planetary Defence conference in College Park, Maryland.

It’s great story, with no help at all from Bruce Willis. Read it at Cosmosmagazine.com

Astronomers have discovered rapidly swinging jets coming from a black hole almost 8000 light-years from Earth.
Published today in the journal Nature, the research shows jets from V404 Cygni’s black hole behaving in a way never seen before on such short timescales.
The jets appear to be rapidly rotating with high-speed clouds of plasma—potentially just minutes apart—shooting out of the black hole in different directions.
Lead author Associate Professor James Miller-Jones, from the Curtin University node of the International Centre for Radio Astronomy Research (ICRAR), said black holes are some of the most extreme objects in the Universe

“This is one of the most extraordinary black hole systems I’ve ever come across,” Associate Professor Miller-Jones said.

“Like many black holes, it’s feeding on a nearby star, pulling gas away from the star and forming a disk of material that encircles the black hole and spirals towards it under gravity.