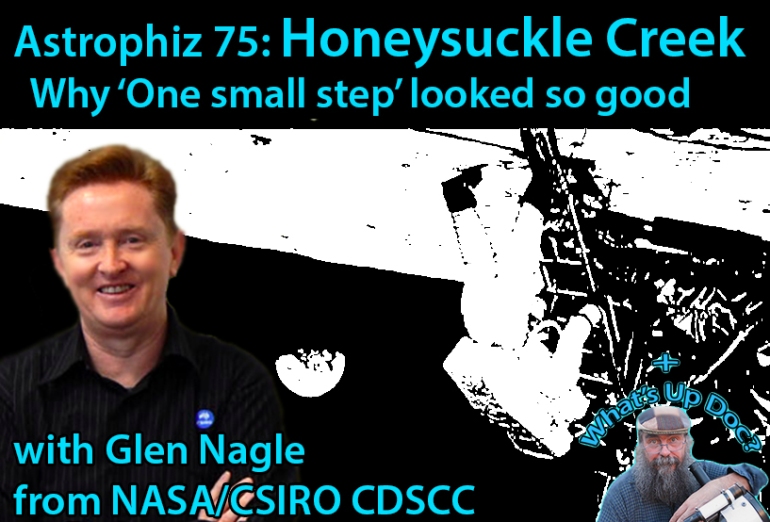 Today we are at the NASA/CSIRO Canberra Deep Space Communications Complex at Tidbinbilla in Australia, and we are speaking with Glen Nagle, who is the CSIRO’s outreach and administration lead and NASA operations support officer.
Listen: https://soundcloud.com/astrophiz/astrophiz-75

Glen tells us how the technicians crewing the 26m dish at the Honeysuckle Creek Tracking Station were the only ones capable of receiving and re-transmitting clear images of the first 8 minutes of Neil Armstrong’s descent from the Eagle Lunar Module and his first small steps on the moon on July 20 1969.  It’s a fabulous story, and Glen then continues to tell us how the CDSCC is using the 70m and 43m dishes to talk to missions doing science around sun, the planets of our solar system and beyond.

For observers and astrophotographers, in ‘What’s Up Doc’, Dr Ian ‘Astroblog’ Musgrave tells us what to look for in the morning, evening & night skies. In this episode all the action is in the morning sky and an easy-to-find comet for binocular and possibly naked eye viewing. He also outlines some of the highlights of the coming year.

When we started this podcast back in 2016 we thought that after we covered the history of radio astronomy we’d do a couple more episodes to keep up with the latest developments and that would be it.

Thing is, we discovered that radio astronomy, space science, data science, optical astronomy and particle physics are all developing at such an astonishing pace that there is no way we can keep up with it all.

So we continue anyway …  and have found that by interviewing the actual scientists working in these specialist fields, we are finding great insights into not only the brilliant discoveries being made on a weekly basis, but also the how and why these generous researchers do their work.

A consistent set of messages are also coming through. Pure research must be funded and supported by governments. If governments insist on research that only has a short-term ‘return on investment’ then we might as well move back to the dark ages, because that’s not how the advancement of human knowledge works.

Another message is that diversity, equity, fairness, respect and decency are essential for healthy science communities.

Any hints of misogyny, sexism, nepotism, overwork and mistreatment and abuse of the goodwill of our current and next generation of researchers continues to diminish our capacity to understand our universe and our place in it.

That said … here is the Astrophiz News

NEXT EPISODE: In our next episode in two weeks we are speaking with Dr Shari Breen, who holds a research fellowship at the Sydney Institute for Astronomy at the University of Sydney. Shari has been awarded the prestigious Bolton Fellowship and has worked on some of the world’s and Australia’s most powerful instruments, including the Parkes Dish and the ATCA.  In 2015 she was named a L’Oreal-UNESCO for Women in Science Fellow for her work on understanding how the largest stars in our galaxy are formed.