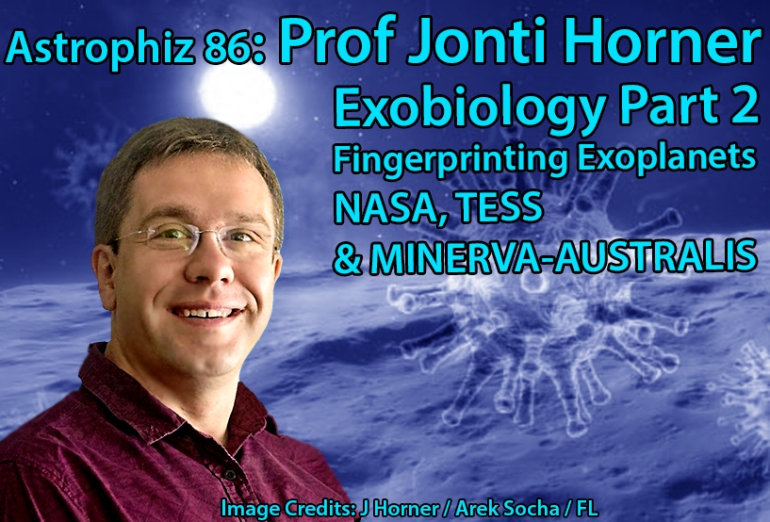 Astrophiz 86: Professor Jonti Horner – Exobiology Part 2
‘Fingerprinting Exoplanets, NASA, TESS & MINERVA-AUSTRALIS’
+ ‘What’s Up Brendan’ because Dr Ian ‘Astroblog’ Musgrave is away at a conference in Hawaii
Listen: https://soundcloud.com/astrophiz/astrophiz-86-astrobiology-pt2
In Part 2 of an extended three part interview, our featured guest is Professor Jonti Horner,  the Professor of Astrophysics at the University of Southern Queensland in Australia. With thousands of citations, he is an esteemed Astronomer and Astrobiologist who researches Exoplanets, Exoplanet Habitability and the evolution of our Solar system. Jonti is leading the construction of the MINERVA-Australis exoplanet search and follow-up facility at the USQ Mt. Kent Observatory.
In todays episode we hear about not contaminating space with our earthly bacteria as we explore the cosmos with robotic spacecraft, the history of exoplanet discovery, the different techniques used to discover exoplanets and fingerprinting exoplanet atmospheres, and how he is in a team working with NASA to confirm TESS’s exoplanet discoveries with the new MINERVA telescope facility using  ‘off the shelf’ optical instruments at the University of Southern Queensland
With our regular host Dr Ian Musgrave being absent, Brendan uses Stellarium software to tell us what to look for in the night skies for the next two weeks, and some observation notes about three concurrent meteor showers — the Southern Delta Aquariids, Alpha Capricornids and Pisces Austrinids, which favour observers in the southern hemisphere, though they can also be observed from northern latitudes.
In the News:

.1. For the first time, led by astronomers from Australia’s CSIRO, Swinburne University and ICRAR have  pinpointed the location of a FRB to a galaxy 3.6 billion light years away, and not only were they able to identify which galaxy the burst came from, but tracked the signal to its precise location 13,000 light years from the galaxy’s centreThe fast radio burst only lasted for 1.3 milliseconds but was so powerful that it emitted as much energy as the Sun would in 80 years.

.2. The Russian Spektr-RG X-ray telescope was successfully launched from Baikonur cosmodrome last week. The orbital observatory commenced its 100-day flight towards the L2 libration point of the Sun – Earth system, where it will be exploring the Universe in the X-ray spectrum.

.3. As an echo of our feature interview in today’s episode, NASA celebrates the discovery of the 4000th exoplanet. Check out the cool short video NASA produced which records all discoveries. You can find it easily on the APOD Youtube channel.