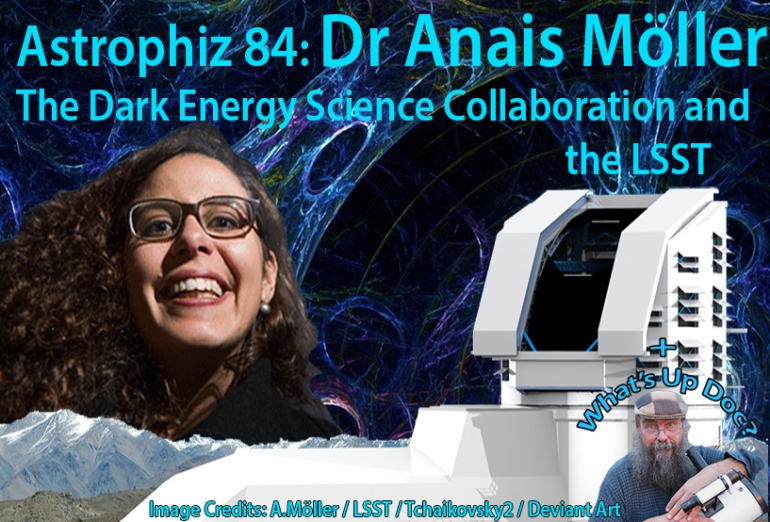 Astrophiz 84: “The Dark Energy Science Collaboration and the LSST”
In this episode we are speaking with Venezuelan-born astrophysicist and observational cosmologist Dr Anais Möller.
Anais is currently based in France and is part of the team who are the science drivers of the Dark Energy Science Collaboration attached to the LSST (the Large Synoptic Survey Telescope) which is under construction at Cerro Pachón on the Andes Mountains of Northern Chile.
For observers and astrophotographers, in ‘What’s Up Doc’, Dr Ian ‘Astroblog’ Musgrave tells us what to look out for in the morning and evening skies.

In the News:
.1. Press release from the University of Bath, UK
Published yesterday on Wednesday 19 June 2019

Good fortune and cutting-edge scientific equipment have allowed scientists to observe a Gamma Ray Burst jet with a radio telescope and detect the polarisation of radio waves within it for the first time – moving us closer to an understanding of what causes the universe’s most powerful explosions.

.2. Via the Max Planck Institute and the German space agency DLR

“A new set of eyes heads for space”

A massive piece of kit called the “extended ROentgen Survey with an Imaging Telescope Array’ (eROSITA) X-ray telescope”, is currently being attached to a spacecraft called the Spektrum-Röntgen-Gamma (SRG), set to be launched from the Kazakh steppe any day now.

.3. via the SETI Institute and Breakthrough Listen.
“The Largest data set in SETI history has been released to the public.”

Breakthrough Listen—the astronomical program searching for signs of intelligent life in the Universe—has submitted two publications to leading astrophysics journals, describing the analysis of its first three years of radio observations and the availability of a petabyte of radio and optical telescope data.